The meaning of the name
"O'SCIA '" takes its name from the words with which you greet the people of Lampedusa. The term literally means "my Wind", "My breath" and is the most intense and affectionate greeting that we can exchange. Greetings extraordinarily vital that communicates passion, strength, energy.
Breath and breath and soul motor of life, a bit 'as the music - when he gives the best of himself - can make us discover or rediscover the most intimate and precious things and the high value of our being with and for others. But "O'SCIA '" is also "Smells, sounds, colors, art dating" an acronym that encompasses the sense of a project that was created to promote the integration of ethnic groups, cultures and faiths, through' meeting, the exchange and the mutual gift of the most high and deep ethnic groups, cultures and faiths have been able to produce and they know and are able to offer: the priceless heritage of their thoughts, words, sounds, signs, shapes, pictures, stories . Meetings of art, then, in the knowledge that nothing more than art is able to bring man to man and help him to grasp the meaning, reasons, instances and the value of experience and the presence of . X EDITION - CIAO'SCIA '2012 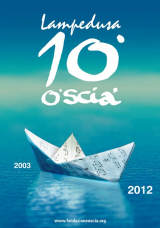 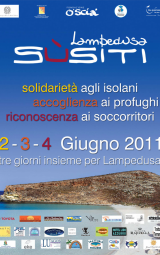 Lampedusa 2 - 3 to 4 June Foundation O'Scia ', Italian Singers and
Artists Association Friends
together to Lampedusa Sùsiti
Solidarity to the islanders, welcome to refugees gratitude to rescuers.

A large gathering-concertoa more voices and more tools - Friday, June 3, at the port of Cala Pisa - with Claudio Baglioni and an entire team of performers, songwriters and musicians; concert preceded by a friendly football match between the Italian National Solidarity Singers (in the thirty years of its history) and Lampedusa Football (Thursday 2, at the sports ground) and later - on Saturday 4 - a series of artistic performances traveling, in the most evocative and symbolic of the island.
Are the highlights of Lampedusa Sùsiti (in Sicilian, "get up, lifted, pulled out"), the three-day event - organized by the Foundation O'Scia 'and Claudio Baglioni together with the Italian Singers NIC Friends and Artists Association AAA - to transmit solidarity to the islanders, reception of refugees and gratitude to rescuers.
The three-day special edition O'SCIA '2011 - which will include, among other things, a meeting of thanks to all those (Police, Emergency workers, international organizations, cultural mediators, Volunteers) devote their time, energy, passion and professionalism to the people of the Pelagian and the people of migrants and refugees - intends to launch, Italy, Europe and around the Mediterranean basin, a message of support, participation and hope.
Many of the artists who enliven exceptionally team in this event, have already brought, individually, their testimony in Lampedusa, on the occasion of the previous editions of the festival O'Scia ', the traditional week of music and meetings between September and October sees the the biggest names in art, culture and entertainment reunite the island Italian and international, to promote the value of integration and preserve the public image of one of the most beautiful marine areas in the Mediterranean and around the world.
O'Scia 'ninth edition 2011 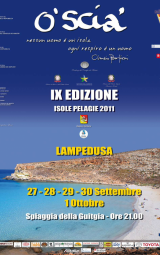 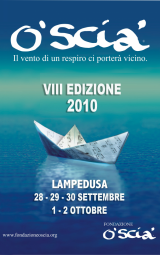 TOGETHER WITH CLAUDIO BAGLIONI
FOR INTEGRATION AND DIALOGUE BETWEEN THE DIFFERENT CULTURES
OVER 100 ARTISTS BETWEEN songwriters, SINGERS, MUSICIANS, ACTORS, AUTHORS, CONDUCTOR The eighth edition of O'Scia ', music and arts festival dedicated to the theme of integration between cultures, took to Lampedusa from 28 September to 2 October 2010.

On the stage set up as usual in the natural arena of the sand beach of Guitgia, Claudio Baglioni, co-founder and promoter of the Foundation O'Scia ', together with over 100 artists will create five days of live shows, unique and unrepeatable.